May 14th, Tuesday  Got everything packed up and ready, as we’ve a 5 PM ferry to catch.  We’ve each got an extra bag that was packed in our main bag because we knew we would gather treasurers to take home, including rocks!  With the cabin tidy and ready, we headed out on one last visit. 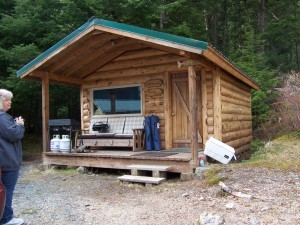 We’d heard John Schnabel should have gotten back to town sometime Monday, that Marge Ward might or might not be in town, and that Mr. Henderson should be home.  We’ll return the extra mattress pads the Salvation Army so kindly loaned us, before we found out that Tracy and Chuck HAVE extras! Then we’ll get a quick breakfast and call folks one last time. 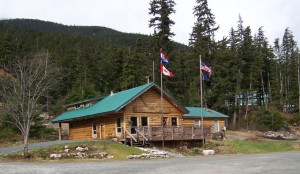 As we leave the campground we are all agreeing that it would have been nice to see a bear, and we’ve seen NONE. Ruth turns up the road for a last look at the Chilkoot side and there is a bear between the road and bay!

We all take pictures, it is rolling rocks and

Grizzly, only bear we saw!

scooping up hooligan that were caught in the tide changes. 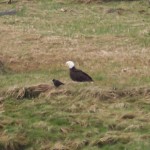 While we get breakfast at Mountain Market, we make calls again and connect with Carol Waldo for lunch later at Chilkat Bakery.  We swing by Senior Living after the Salvation Army store, and they say yes John is back from his trip but not there right then. 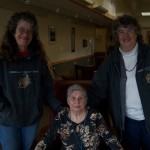 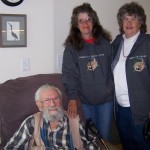 Ray Menaker and Erma Schnabel are in the lounge and we chat with them a few minutes before leaving. 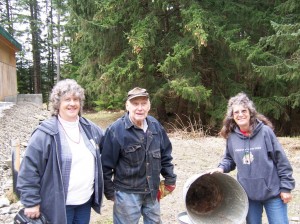 Stopping up at Mr. Henderson’s,

he IS home and we have a nice visit there.  A call earlier to Alaska Roadbuilders, owned by Roger Schnabel, still does not get ahold of John but we are leaving our number for him.  We swing out past the airport anyway to check; he is not there.

As we talk [who, us?] about how we are making last minute connections etc, we comment that now if we only had seen a moose.  Right there at the south end of the airport, two moose in a field.  Cow and a yearling.  They put on quite a show for the tourists! 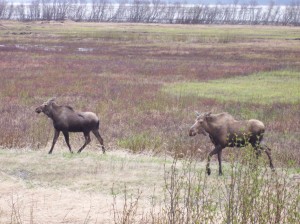 Just before that sighting, we’d gotten Marge Ward on the phone and directions to her house so off we went, only a little delayed by the moose sighting.  Finally found her, we had missed a turn, and had a great visit there. 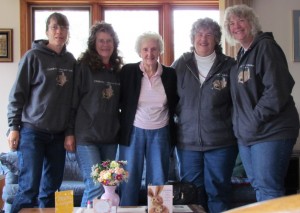 Everyone had said John was bound to be back at the Senior Living in time for lunch at noon, and as we were climbing Marge’s stairs he called to say yes he was there and would not leave before we made it back there.   Called Carol to say we’d be a bit late for lunch, and she said no problem. 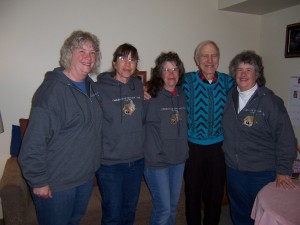 Back to Senior Living and a good visit with John, who did remember us and had a couple stories to tell about our Dad working for him.  Got pictures with everyone and then off to lunch.  Good visit with Carol, and then goodbye to Haines because we must get back and load up for the ferry.

Tracy was there to drive us down, and reclaim her vehicle!  Jan met us at the ferry terminal and we all visited until time to give hugs, say goodbye and get on board. 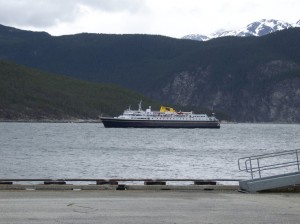 The rain was only a short way down Lynn Canal, so after one more look at Haines and Port Chilkoot, a rainy wave at Davidson Glacier barely visible through the clouds and fog, and the same for Eldred Rock, we were done.  Had a nice dinner in the cafeteria and played cards at the table there as it rained outside. 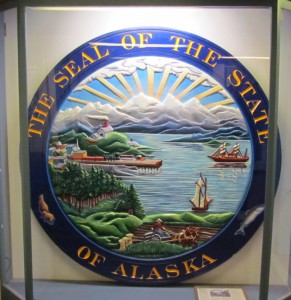 Alaska State Seal, on the ferry

Getting dark as we pulled in to Auk Bay, and we were pleased to see the shuttle for Super 8 pull up just after we got our bags from the cart.  After 10 before we were in the motel, and we were glad for our beds [real ones!]  They found us extra pillows too.

May 15th, Wednesday  Hot showers in the morning, complimentary breakfast just three doors down on our floor, repack just a bit and we are good for the day.  Girls had time to go wander in the shopping center not too far away, and I read in the lobby waiting for a friend who lives in Juneau.  She was unable to come over, as it turned out, but was nice to just read quietly and nothing else!

Girls got back and we shuttled to the airport and checked our bags in for our 1:20 flight to Seattle.  Very low key small airport so we now had time to order lunch and have a drink because we are not driving!

Believe it or not, at this point we are STILL in the ‘can’t believe it happened’ mode.

In Seattle, we part company…only not as soon as we thought!  First we find our flights, though a good three hours apart, are scheduled to leave from the same Gate.  Plus the Boise flight is delayed.  A deck of cards, and something to drink (juice this time) and we entertain ourselves at a convenient table for quite a while.  Boise flight keeps getting more delays but eventually they leave and we find seating closer to the gate.  Our flight ended up delayed a half hour as well, putting us in Medford about 12:30….which means we were not home until Thursday morning!

Pretty sure there are some funny things that have been left out, but then you know “What happens in Haines, stays in Haines…” 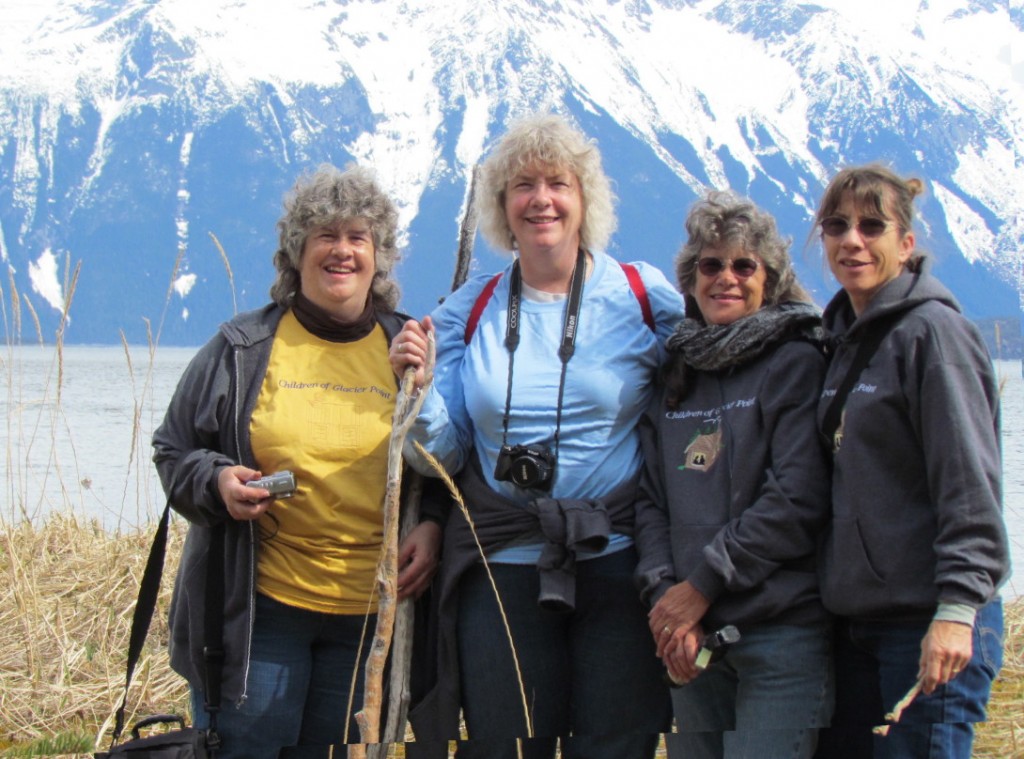 It was an Epic Adventure and we loved every minute of it.
~~~~~~~
If you are interested in the books, Children of Glacier Point book 1 and book 2, visit Brainstorms Publishing.  These are true accounts of our parents homesteading, starting in the late 1940’s.